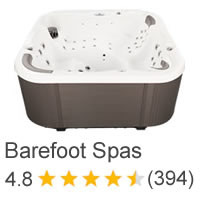 (Write a comment)
We got a hot tub… Finally!

We spent a lot of time researching hot tubs, going to dealers of several different brands, and learning all about pretty much everything. The way we found barefoot spas is actually kind of random. We were driving by a fairgrounds and we saw a sign that read hot tub sale (with an arrow pointing to a barn). As weird as it was, we could not resist, and while I was in information overload mode with hot tubs in general at that point, my wife insisted we go in and look. we pulled in and our journey began. After meeting quite a few reps there, all very knowledgeable, (they even knew a lot about the ones we already researched), we decided we were most interested in the barefoot spas 77LP model. It is also called the Pagani Platinum on their website. This is the one we eventually did purchase.

The pricing was VERY good, and much less than other hot tubs we saw in stores. Not the CHEAPEST, but after comparing several features, and doing a list of pros, cons and comparisons, we decided it was the best deal comparatively. Missing a couple features we liked, but added some features we hadn’t seen anywhere else. That was enough to make us bust out the credit card and charge it up! FINALLY!!!

Now we are hot tub owners, and the long wait was at it’s end. I should mention another thing. One of the perks of doing business with barefoot spas (at this show), is they actually had one there we could get right away. This happened to be the one we liked, and that was what I liked most about it; availability. My wife was fine with waiting the anywhere from 10-18 weeks in some cases lead time at the stores we had been to at that point. I was NOT. Very tired of spending time on it, and the bottom line was, we wanted a higher end not tub we know we can depend on to work. We wanted low maintenance, strong horsepower behind the jets, the list goes on and on. Point is, we got all of that with Barefoot!

So take it from me; a guy who was dragged in to 5 hot tub stores, wasted an enormous amount of time, (including countless Saturdays I wont get back), I know what I’m looking at, and Barefoot was one of the best comparing them all. They checked out in every way we (or I should say my wife) checked them out. If you can find a good deal like we did, and you don’t mind walking in to a random barn that smells like livestock, and manure to get a deal, than go get it!