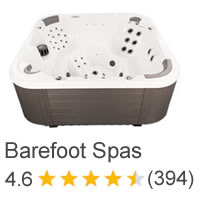 Barefoot Spas 88NP Review:
We have had a number of barefoot spas problems, but most of them have been minor and we’ve been able to figure them out on our own. I’m no professional either. I admit, I’ve tried fixing things around the house before and only ended up breaking them more, and causing more issues, but the hot tub has been relatively easy.

We’ve had the 88NP for a while and we really like it. Not a lot of barefoot spas problems. The only real issue I had in the past 5 years is the connection for the hose on the inside broke. I don’t know how long it was broke because I was using a sub pump, then that broke LOL. Anyway, need to get a new pump I guess, but the problem with the spigot is the knob doesn’t turn. I tried looking online to see if anyone had a problem like this and didn’t find anything. The part is out of warranty, so i called Barefoot Spas and they said they could get me the part but it would be expensive, plus I would need to hire someone to put it in. It will be more expensive than buying a new pump for $75 at harbor freight.

Anyway, to any one else reading this and having barefoot spas problems, don’t mess with the spigot. It’s worthless, just get a sub pump to get the water out come time to drain it. Plus, if you drain it with the spigot, it takes FOREVER! it took me about 2 hours the first time. The sub pump takes roughly 20-30 minutes. Solid investment, and I highly recommend it. When I called barefoot spas about the spigot, they said the new ones, they don’t even use that part anymore. I wonder why??