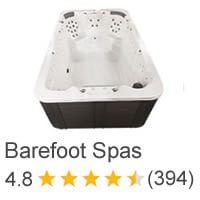 Barefoot Spas SS12 Review:
I did a lot of research regarding swim spas and only saw a couple in person. I bought one online for $9,999 and by the time I was finished it was $16,000 and I had to place it in my backyard myself. The company wouldn’t even place it where I wanted. It worked for about a year and a half and broke. The company wouldn’t help me out.

Last week, I went to a Barefoot Spas expo in Baton Rouge and the their swim spas performed better than any that I’ve seen so I bought a 12’ Barefoot Spas SS12. It’s built very well and I like the fact that it’s American made and you don’t have to use chemicals which saves me a lot of money. They are more expensive than the junker i bought online for good reasons. Well worth the money.

I had a wonderful experience with Barefoot Spas and the whole process from the salesman Drew to the delivery crew. Everyone was very nice and also very professional. Did I mention I got a VERY good deal on it? That had a lot to do with how happy I am now. I wanted to upgrade from the the first one we owned simply because it was the worst of the worst. What we found was a lot of prices pretty much all over the board from top to bottom. Put it this way, if I hand’t gotten a good deal on the swim spa buying direct from the factory, we wouldn’t have been able to pull it off. I won’t publish how much we paid, but it was over 10k than the same exact spa I saw at the store!

As far as service goes, I had one problem but customer service handled it pretty much immediately which goes against some of the other reviews I read about their customer service. Thank you Barefoot Spas for a wonderful product and experience. The have not let us down. I recommend their product to anyone.