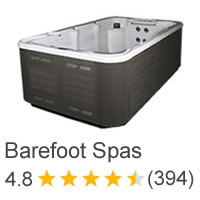 Write a comment
Our experience with Barefoot Spas
My wife and I own a 13 foot long barefoot swim spa SS13 model number. We decided last year we wanted a swim spa, and we knew we would get one. Friends of ours in Northern California have sworn by the benefits of their’s for years. It wasn’t until we flew out there to visit that we decided it was no doubt the right thing for us. My wife suffers from a hip injury, and I’ve worked hard my whole life, and beat up my body in the process. Water exercise and therapy are two things I am very happy to have in our lives.

We purchased the swim spa at a factory direct sale from barefoot spas at the fairgrounds. It was pretty unusual. They were set up in an old broken down building that was “sub standard” as my wife explained it. To our surprise, when we showed up, I remember saying WOW, this really is the place! They must’ve had 80 or so spas in there, all shiny and in perfect condition. They told me they sell out of them every time they so a sale. I believe it because we saw nothing but sold signs and it was surprisingly busy.

That brings me to my point. We took quite a bit of some time to consider this purchase. I mean, it’s a big one right? We were at that show for a very long time. Our reps name is Ezra; really really nice guy. He was patient to the core with us. I don’t know, I guess its just been a while since I’ve met a salesman who I really feel cares! He called us this morning to check up on us… again! That is what promoted me writing this review. Ezra really is great guy.

When we’ve purchased vehicles and other big things in the past, we have met some nice people, but it seems like that cordial attitude and friendship fades away with time. Not with Ezra. He seriously makes me want to spread the word about his company and this is all without him even asking me to by the way. Very impressive man. We have just been thoroughly impressed.

We called him a few times after the purchase for advice on some things (when I knew I should’ve really been calling customer service), and every time without hesitation, he helped us along, answered our questions, and did it with a smile.

I do not know how this works, but if someone wants to get in touch with Ezra for a wonderful experience in buying a spa, I don’t want to post his number here without his permission, but feel free to message me privately and I would be more than happy to refer Ezra directly to you.

This just goes to show you, don’t judge a book by it’s cover. We went to that spa show and almost turned around in the parking lot becuase of the appearance of the building. I can tell you now, we are very happy to have gotten out of the car, and met Ezra that day, and also Scott (who I think was his manager). Barefoot spas is really a great company, and again, if you have the chance to work with Ezra at one of those spa shows, don’t hesitate. Believe me, he will take care of you, and we are just so thankful to have him as our resource in owning our amazing swim spa!